The Greenmount copper deposit is located 36km south of Cloncurry and lies within ML90134. Greenmount is the flagship deposit of the White Range project at a 12.7Mt resource. Drilling programs were conducted in 2012, indicating high-grade copper mineralisation as well as significant gold credits. The gold appeared to be primarily free gold and could potentially be extracted by gravity and/or gold leaching techniques. Drilling results indicated grades of between 2.4% to 5.7% copper between depths of 100m to 155m. Deeper holes indicated significant grades of molybdenum. Deeper diamond drilling was conducted to test the down dip potential of both Cu Au and Mo Re mineralisation. 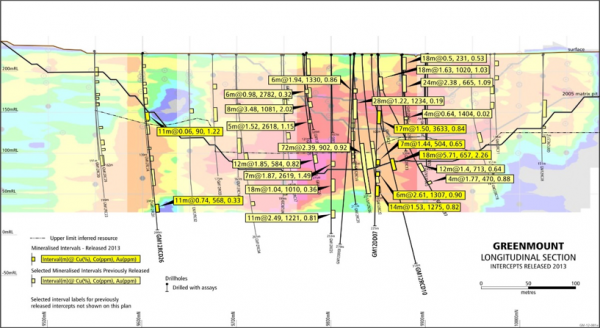 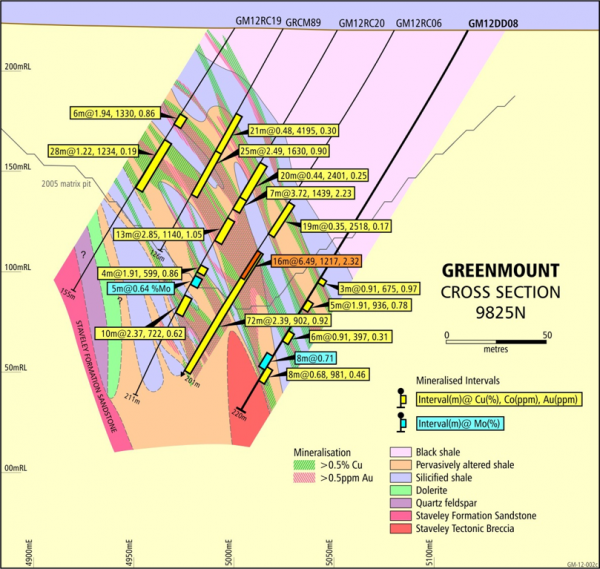 The Kuridala mineral resource lies 65km south of Cloncurry and is within the mining lease ML90081 that allows open pit mining down to a nominal depth of 100m. The deposit is at a well-known locality as it was previously mined for both copper and gold between 1898 and 1921. Combined ore production of 193kt is reported although unreported production of up to 300kt has been postulated. Hampden Cloncurry Copper mines was formed in 1906. Hampden held the northern end of the deposit and commenced smelting operations in 1911. The Hampden smelter treated a total of 685kt of ore from Kuridala for a production of 51kt of Copper, 20koz Gold and 381koz Silver.

The Young Australian deposit consists of four mining leases (ML7511, ML7512, ML90084 and ML90099) and surrounding six sub-blocks within EPM18912 which is held by Chinova Resources and from which QMC has the exclusive rights to explore for mineralisation over a period of 8 years until June 2020. Young Australian has been explored by QMC from 2008 to 2015, followed by a JORC resource update undertaken in July 2016 reporting a total resource of 5.1Mt. It is worth noting that this resource remains open along strike. In addition, QMC’s exploration program in 2015 discovered a new mineralisation zone (Tank Hill Zone) up to 1,000m long located about 300m east of the main Young Australian mineralisation zone. 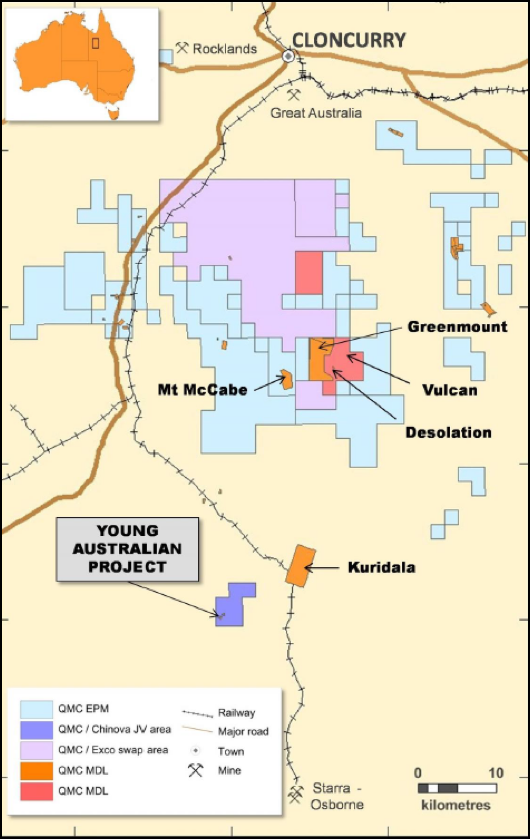 The Mt. McCabe mineral resource lies 40km south of Cloncurry and lies within ML90082 and covers an area of 273ha. Mt. McCabe is within 10km of the Greenmount deposit. The Mt. McCabe deposit was discovered in 1906 and mined in 1907 with uncertain production. Open pit mining in the 1980s produced 10kt ore grading 4.5% Copper. The Mt. McCabe copper-cobalt deposit is located near the south-western flank of the Marimo basin. The mineral resource was originally estimated by Matrix Metals in 2005/6, however QMC engaged Golder Associates to update the resource model in 2010.

The Vulcan mineral resource lies 36km south of Cloncurry and lies within ML2519 and covers an area of 4ha. Vulcan is within 3km of the Greenmount deposit. Vulcan was historically mined from 1905 to 1931. Records indicate underground workings extend to 46m but lacks information on depth and location. Exploration commenced with Glencore in 1963 followed by Powder Metals Australia in 1980s. The Vulcan exploration database includes 191 drill holes for 6.0km which excludes the Glencore drilling that could not be located accurately.

The Desolation mineral resource lies 38km south of Cloncurry and lies within MDL205.
It is also 0.7km east of Vulcan and 3.5km southeast of Greenmount. The Desolation area has been explored intermittently by Homestake, Majestic Resources and Matrix Metals from the late 1980s to 1990s in the form of geological mapping, soil geochemistry and RC drilling. QMC drilled 52 RC holes for a total of 1.8km in June 2012. Most of the holes are relatively shallow and limited to 30m depth.

Highlights from the 2012 drill program include: