The Gilded Rose gold project covers 227km2 of exploration tenements (including 6 mining leases for 187ha) within the Pumpkin Goldfield in Cloncurry with a total JORC resource of 108,400 oz Gold contained in two separate deposits located at Gilded Rose (15km southeast of Cloncurry) and Mt Freda (40km southeast of Cloncurry), respectively. In addition, there is a carbon in leach gold plant in Gilded Rose with an annual processing capacity of 60,000t of ore currently placed under care and maintenance.

The Gilded Rose gold deposit is contained within the Mt Norma Quartzite member of the Proterozoic Soldiers Cap Group, which consists of quartzite, schist, phyllite and metamorphosed greywacke, amphibolite and metadolerite. This unit is overlain by the more mafic rocks of the Toole Creek Volcanics which hosts the Mt Freda gold deposit some 25km to the southeast. Gold mineralization at Gilded Rose occurs as sheeted quartz veins and reefs within an interbedded sequence of schist, phyllite and amphibolite rocks which can be traced over 1km along strike. In contrast, the gold mineralization in Mt Freda is present as pyritic/limonitic quartz and carbonate breccia and veins along a near E-W fault zone up to 400m long and 10m wide, steeply dipping south.

Recent drilling by QMC at Gilded Rose and Mt Freda has reported some very significant intersections, including:

Most mineralized zones remain open along strike and at depth and further drilling will have a great chance to increase the resources. 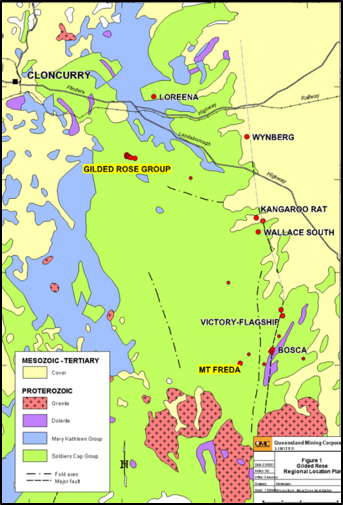 The assets included in the joint venture relate to the total shares on issue in Spinifex Mines Pty Ltd and QMC Exploration Pty Ltd, which includes the following tenements:

Key terms of the Cloncurry Option Agreement (as per AusMex ASX announcements) indicate that AusMex has been granted the rights to acquire:

A condition of the joint venture is that AusMex will fund 100% of the holding, development, production and exploration costs.

The original Exercise Price relating to these options were:

On 9 May 2017, AusMex gave notice in relation to the First and Second sales, thereby acquiring a total of 80% of the joint venture with QMC for a total consideration of 12,500,000 shares in AusMex and A$1 million cash. YAML understands that the AMG shares are currently held in escrow until June 2018.
The North Cloncurry option to acquire Morris Creek, Flamingo and Jessievale was not exercised (see AusMex 2017 Annual Report).

1QMC’s ASX announcement suggests the additional A$1 million to be paid in two tranches will become effective on production of 1,000 and 5,000 ounces of gold, respectively. This is not mentioned in any of AusMex’s ASX announcements which state a “First Sale” is completed by issuance of 12,500,000 shares to acquire a 60% with the “Second Sale” and “Third Sale” completed by paying A$1 million for 20% in each case.